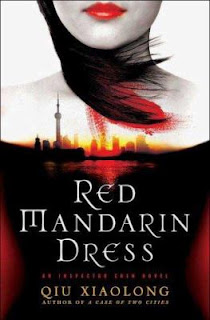 This review was originally published December 31, 2012 on Amazon.com

An old man, soon to be forced out of his old familiar Shanghai dwelling by a developer of high rising, expensive apartments finds a young woman's body, her legs askew, barefoot, without underwear, clad only in a torn red Mandarin dress, (qipao). This opening scene of the Inspector Chen crime novel 'Red Mandarin Dress', illustrates the theme of the old and new China colliding with painful consequences. The Mandarin dress, is a perfect vehicle of this clash, as it was once a symbol of elegance in the China before Mao, then a symbol of decadence, only to re-emerge in the post Deng Xiaoping era as a chic symbol of wealth and status. Qui makes the dress his serial killer's calling card and the search for the killer is a trek through 20th Century China itself.

Inspector Chen, a famous Shanghai detective, is getting pressure from his Communist party bosses to take on a political case to protect the Party from embarrassment in a real estate corruption scandal. Chen, who has translated several famous Western Detective novels into Chinese, is a lifelong amateur scholar and is finally getting serious about his hobby. He wants to avoid the dirty real estate case by trying to plead off by saying he is too busy with a literature class. A noted human rights lawyer has the party in his sights again, this time by suing a crooked real estate mogul who is pushing people out of their homes. The Party wants to bring him down. Chen's maneuvering to avoid the real estate case is a classic illustration of the social mores that dictate relationships in official China. Chen is not brought in to investigate the murder until a second one occurs with the same MO - the disheveled body, suffocated, in an identical, old style, hand-made Mandarin dress. Neither one of the bodies had evidence of sexual activity.

The politics of the Chinese police play a central role in the novel. Li, the party leader, sees everything through the lens of the pre-boom China. "Check with the neighborhood committee' he says, clearly oblivious to the fact that Shanghai life had changed - at least for the wealthy. People had their own apartments now, and were not under the thumb of the old Party ladies who controlled everyone's life with gossip and 'motherly' intrusion. The real cops barely give Li lip service while moving ahead with the case based on the reality of the evidence and their available resources. Li is of course concerned because of the public nature of the crimes, because the bodies are being left in the most populated areas of the city - right on Nanjing Rd, in the center of town. The information starved daily news papers are speculating in a way worse than anything readers of Fleet Street or the NY Daily News could even conceive. Sex and Murder in a town where politics can't be seriously discussed are big stories.

There are a host of secondary characters in the novel - Chen's colleagues Liao and Yu,Yu's wife, Little Zhou, the department driver and Hong a pretty young police woman ho is assigned to the case. All are devoted to Chen and help him by doing whatever research etc that he needs. Inspector Chen also has a host of other allies, business men and restaurant owners who vie for his favor. He even has a young woman, White Cloud, whose salary is paid by Gu, who wants Chen to quit and work with him in his business. White Cloud would be anything Chen wants, but her main tasks is checking up on Chen's mother, who of course wants him to marry.

There are others too - the literature professor he studies with and his daughter, and all of the people Chen meets as he investigates the crime. Beijing (the Central Government, hated by Shanghai) continues to pressure him on the first case too, so he investigates the human rights lawyer who is suing the real estate crook.

Chen only begins to devote himself to the case when someone close to him is killed by the serial killer and we start diving into the real story of the Red Mandarin Dress. Chen is a weak man in the Western sense of the word. He is constitutionally the opposite of the typical American hard-boiled detective. He can't handle coffee much less booze. He has a serious nervous condition and he has to steel himself constantly to push on to solve the case. Chen is constantly moving in his thoughts from the past to the present and seemingly gets side-track on the most obscure points of literature. Because Chinese people have a deep respect for teachers and scholars his foibles are tolerated. Even Li the Party leader leaves him alone. As much as money drives this new China, a man like Chen retains real power because deep down, the Chinese really don't respect 'Big Buck'  guys even though they fear them. Confucius remains the model man.

The case has roots in the Cultural Revolution, which deeply scarred China and in large part, this novel is about that scarring. Chinese policy, after Cultural Revolution finally ended in 1979, was about forgetting. Too many were guilty for a full accounting. If you think of how the Vietnam War still affects the US, with division, mistrust and anger, and multiply it by ten thousand - even that, I think, would not come close to the affect that that period of discord had on China. The novel intersects the Cultural Revolution with the modern changing Chinese society in a way that is startling and yet is restrained and understated in the 'Chinese manner'.

Westerners who come to this book thinking of the other detectives whose adventures have been like Chandler's Phillp Marlowe or Hammett's Sam Spade or any of the detectives of Elmore Leonard might be frustrated by this novel. While all of these authors have their digressions - think of the long section about the history of the Maltese Falcon that Dashiell Hammett invented - still their digressions are 'hard links' to the main story. Sometimes Qui's digressions are 'soft links' - they kind of sort of fit into the big puzzle, but not directly. The novel is a bit of a scholarly romp though the history of Chinese poetry, a deconstruction of ancient stories that are told again and again, each time changing, the history of Chinese clothing - and the details of the organizational structure of the Cultural Revolution and its affect on real people. Another words, its not a detective potboiler. If you want to know who done it, you have to wait, (even though it is easy to guess about 2/3 of the way through)and if the scholarly romp doesn't interest you, then it might not be your book.

The murderer, when he is finally found, will not be an unsympathetic character. You could say that Hannibal Lector had some good qualities, but this goes way beyond that. So, once again, it is not a book that fits between the lines normally found in the genre.

Novel's like this - hybrids - are difficult to judge and grade. In math - X + = -. So if it is a good scholarly romp but a bad pot boiler - well that is a minus. I liked it - and give it 4 stars, but it has to find the right audience. I think anyone who knows China and loves it for what it is will appreciate it. If you are new to the Middle Kingdom - then be ready to adjust your expectations about what a detective novel is about.
at March 17, 2018
Email ThisBlogThis!Share to TwitterShare to FacebookShare to Pinterest
Labels: China, Review