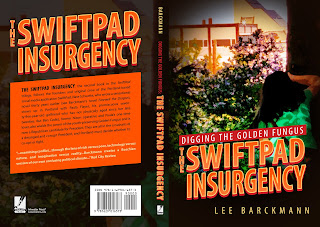 THE FIRST THING AMAZON DID WAS TAME THE
SwiftPad Bots. But the next generation of bots designed
themselves, and they slowly came back, more stealthy, scary,
and harder to detect.
The app’s Bots often got into arguments with other Bots and
took different sides of real issues, trying to bait “blood-bags” (as
the “Bots” referred to humans) into the fight. There were factions
within factions among the Bots too. There were “Bot” issues,
about which humans were unceremoniously told did not concern
them. The Bots had been designed to fuck with humans. Bots
would slightly lie about real users’ input, the way real people do.
They lied about other users’ input (but didn’t change it) to make
an opposite point. The Bots lied and tried to pretend other Bots
were the real enemy and that they were telling the truth. The
Bots betrayed real users or other fake users (Bots that would then
fake outrage). They would often switch sides in the middle of a
discussion. Since it was impossible to tell who was real and who
was not, this drove people to the heights of ecstatic apoplexy.


Read more about it

There was a now a huge permanent underclass of homeless Americans, way beyond anything previously, even dwarfing the Great Depression. The man in power, contemptuously called by one and all “Temp-Prez,” had apparently flushed the previous President out in a surprise putsch, and then tried to assume his mantle by continuing his cruel and short-sighted policies. The “Real-Prez” had been on a golfing holiday, when he was somehow convinced to agree (no written agreement has ever been discovered) to “temporarily step down.” His family then had him committed to a “psychiatric facility” in New Jersey hours later.
From The Fall of it All – A History of the Big Dump

The Three-Body Problem by Liu Cuixin

Other than a brief visit two years ago, I have been away from China for 32 years. Before I went, back in the early 80s, I studied the Chinese language for a couple of years pretty seriously. I can still engage in simple conversations, but my fluency has declined, and I periodically dedicate whole weeks to study a little bit every day to maintain my weak grasp on the language.

So, when The Three Body Problem (in Chinese - santi - 三体 - Three Body) came to my attention, I thought I would try to read the Hugo Award-winning Science Fiction novel in Chinese. I read the first three (of some 30) chapters, but even that took me a long time. I had to look up quite a few words and phrases, and I got sidetracked over it, then re-read what I had read, and discovering I really didn’t completely “get” it the first time, etc. I have a friend who has read it, and I wanted to catch up, to have something to talk about. So I switched to the English version and discovered 三体 is a very complicated book in any language.

The Three Body Problem requires its reader to have a bit more than a passing interest in modern physics. I don’t just mean Newton’s classical model, and Einstein's Relativity, but also Quantum Mechanics, the recent discoveries from particle accelerators experiments, String Theory, and it’s associated multidimensional analysis. It doesn’t require the math, fortunately.

The big story is the first contact with extraterrestrial intelligent life. Through an interactive computer game developed by an earth human waiting for their arrival, we learn the “real world” physics problem of a planet that “orbits” three suns. By “orbits”, I mean this planet, Trisolaris, is caught in the gravitational fields of three distinct “suns” (stars) that while also mutually entrapped in each others gravity, vary in every other important aspect (mass, velocity, vectorial direction of movement, etc). Life on this planet is a series of astronomical disasters, and the dominant species has evolved to survive both long and short periods of intense cold and heat and tectonic catastrophes.

The three body problem is a famous physics conundrum, first practically approached by Amerigo Vespucci, the travelling mapmaker, from whom the continents of the western hemisphere are named. The moon, earth and sun are three bodies and Vespucci attempted to use the predicted locations of the moon and sun to determine his position somewhere near Brazil. He predicted wrong.  Newton had not yet been born, so he based his estimate on past locations, and progressions of motion, which don’t really work on any regular basis. In reality, there is not a general mathematical solution to the problem, although there are rules for “special situations” such as the moon, earth and sun, discovered centuries later.

The story is extremely rich in various other physics problems, such as string theory, quantum mechanics, and of course in the general and special theory of relativity. In the English translation of Three Body, the story starts in the 1970s, in China during the Cultural Revolution. I have a Chinese version of the story that skips this beginning, probably because it really shows how embarrassingly awful the CR really was. Ye Wenjie refuses to denounce her father to the Red Guards, and is exiled, and is denounced again when she reads Rachel Carlson’s “Silent Spring”, and tries to warn people about the dangers to the environment. She ends up with a menial position on the “Red Coast” base with a primitive radio telescope. But her skill and knowledge, (she learned from her father, a famous physicist) mean she is utilized, regardless of her political “unreliability”. Listening to the signals on the radio telescope, she gets the first message from the aliens, the Trisolarians. The sender also warns her not to reply, because the sender is a traitor, and does not want his planet to discover another planet, because Trisolarians will conquer and destroy it.

One thing I learned in my very shallow and superficial exploration of classical Chinese is that stories have many levels of meaning. Scholars told allegories using figures from the Chinese past to comment on the Emperor's actions.  I am not sure if this was Liu's meaning, but I saw Wen listening for and receiving a message through a radio telescope as a symbol of Chinese isolation from anything in the West. It tells of the longing to make contact with anyone and only having primitive equipment to do it with.  When I lived in Beijing in the 1980s, a decade after the end of the Cultural Revolution, I kept in touch with my family by riding my bike to the telegraph office.

The Chinese version of Three Body starts 50 pages and 40 years beyond all that 1970s history. The full uncensored version, translated to English in the West, is also readily available in Chinese on the mainland, even as a Chinese “Audible”.  Chinese people have relatively easy access to the uncensored version.

But when I did read the first fifty pages in the Chinese version, I think the effect was a more exciting opening, from a story-telling perspective. Its a familiar world, and are thrust into the action, with sharply defined characters, and powerful tension ratcheted up right away at a meeting with an international group of military leaders, scientists, and security experts, American Generals, Russians, Chinese, all scared shitless, trying to come up with a common defense strategy against an undefined extraterrestrial threat. A Chinese detective, Da Shi, a chain-smoking, profane, emotionally calloused, unsentimental cop, is the central character at this meeting. The story started from this point, has a “noir” feeling, kind of Chinese Raymond Chandler yarn. It drags the reader in immediately. But without the background about “Red Coast” base, the reader will eventually be lost, (as I was), because the backstory is critical to understanding why characters act and feel the way they do. It is so much more than a sci-fi “whodunit”.

Once the world knows the invasion is coming (a couple of hundred years in the future, because they are travelling at 10% light speed) we will divide up into factions, one so filled with self-hatred that they will destroy the people of the earth to make it easier for the “Trisolarian” invaders, another that thinks they can help the Trisolarians find a solution to the three-body problem, and somehow not have to invade. And another group that just wants to survive with the Trisolarian as their overlords.

It is the first novel of a Trilogy, and there are two more books to read.  It is definitely not a “beach read’. But if you want to understand the rise of China,, this book will reflect the choices people needed to make it in the peculiar circumstances of China's recent history.  Liu Cuixin's novel starts at the “Frontiers of Science” and pushes borders way beyond what I have read anywhere else.

at March 13, 2019 No comments:
Email ThisBlogThis!Share to TwitterShare to FacebookShare to Pinterest
Labels: China, Review