About Digging the Golden Fungus: The SwiftPad Insurgency 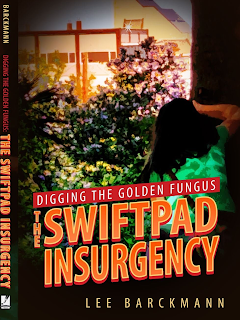 The SwiftPad Insurgency
What can we do about the Trump presidency? This novel is a worse-case, very-near-term dystopian chronicle set in a fictional Portland Oregon.

But The SwiftPad Insurgency is a sequel. So if you want to jump into it without first reading The SwiftPad Takeover, here are some survival tips to help you navigate the second book without reading the first.

Get the first book
The SwiftPad Takeover

The story in the first book, The SwiftPad Takeover, takes place about five years ago in 2014. Kip and Jim, childhood friends who grew up in a rural Oregon logging town go their separate ways, only to meet again in Portland. Kip meets a young “Goth Girl” (GG) from the east coast who was once voted “Most Likely to Virtualize” at DefCon, a Black hat computer hacking convention. She has an idea for a social media app that has the potential to blow away Facebook, and all of the other smartphone eye candies on the market. Kip helps GG’s get the app’s business off the ground, and eventually brings Jim in as well. They call the app SwiftPad.
There is a serial killer lurking amongst them all, as well as a vulture-like corporation (GIP - Global Industrial Processors) aiming at taking over both a local energy company and SwiftPad Inc. itself.
The characters: Kip, also called Chubby, aka Cornelius Welles, or as GG calls him - K - is the son of a rapacious capitalistic, hard-assed logger, (Walt Rehain) who takes over all the logging operations west of Philomath Oregon, and is hated by his neighbors. Kip hates (and loves) his father. His best friend is Jim Hunt, the son of a local failed logger who had drunk himself to death. He is raised by his Mom (Alice Hunt) who really discovers herself after her husband's death, and becomes a community and then a national left-wing shadow leader. She and Walt also have a love-hate relationship and she ends up taking over Walt’s empire.
After high school, Jim leaves his logging town, joins the army, and becomes a success in the IT industry. Chubby tries and fails at a number of business ventures, (backed by his father) until he meets GG, a nerdy genius from the Washington suburbs, a “Goth Girl” who comes up with the idea of SwiftPad. They meet, have sex and Chubby gets the initial funding for SwiftPad from his trust, and from others (some parodies of well-known Portlanders) and they start the business in Portland. Some of the other characters, such as Hadley and Archimedes were part of the SwiftPad team. How all this comes about is explained in the first book.
Spence, Kayla, Alison, and Paula are new characters to The SwiftPad Insurgency.

Nate Schuette also shows up. He was the main character in my first novel “Farewell the Dragon”. That novel was set in the mid-80s, so now, of course, Nate is much older.


There were some comments concerning the near-term dates in the book. The action starts about four months after publication, (November 2019). The world is in much worse shape than it is now here in our "real" present.
So the question that begs is, will the novel date itself too soon to be meaningful, and will the story too quickly pass its expiration date? Well - People still read 1984. And really, I don't care because "...Insurgency" was inspired by the current, real emergency, and it is only meant to wake the readers up to what is at stake.
The SwiftPad Trilogy is an alt-history, a speculative tale that could almost be science fiction, and is very political in nature. In this ‘parallel universe”, things have begun to slowly veer away from the history we are living in now. It happened sometime after Nixon. Or did it? Is this world a hidden history of reality, and the world we think we know, of cable news, and Trump rallies, the actual illusion? Both cases are possibilities. But let's keep it simple, and stick to the story that the “now” we all know has gone off the rails.
As The SwiftPad Insurgency is a sequel, (and the second in a trilogy) much is explained in the first novel The SwiftPad Takeover. But the prequel turns out to be (to my honest surprise) my first novel Farewell the Dragon. In that novel, set in Beijing in 1987, we are introduced to Nathan Schuette, a 36-year-old would-be entrepreneur, and sometime English teacher. Now, he is almost an old man, in his late sixties. His journey before and after his time in China is the quintessential tale of the baby boom generation.

The SwiftPad Insurgency, like its predecessors, is filled with hyperbolic catnip for fantasists, conspiracy nuts, paranoids and seriously disturbed cynics. SwiftPad Inc. is now established as the primary source of information for the world at large and is the only institution that the dictatorial Presidential junta can not turn off, and it is centered in Portland Oregon. The @real-Prez appears to have gone totally around the bend and has been overthrown by his own Vice President, or “@temp-Prez”. But natural and manmade disasters, combined with fascistic actions, have made millions homeless. To be homeless is now as criminal as to be an “illegal alien” was in 2019. Millions are either camped around Portland or are on their way. Temp-Prez has sent the reconstituted para-military (V)ICE (V for vagrancy), to overthrown liberal Portland and send the refugees to Haliburton-built camps in the desert.
As to what happens, well you are invited to get the novel(s) and find out!
Check out two recent reviews!
Reader Views
Red City Review
at August 01, 2019 No comments:
Email ThisBlogThis!Share to TwitterShare to FacebookShare to Pinterest
Labels: My Fiction