Notes on the Second Edition of my First Novel, or How I Learned to Write

Notes on the Second Edition of my first novel

The primary reason for producing a second edition of FTD is that the first edition was full of embarrassing errors. When I first published Farewell the Dragon in 2006, I was an amateur writer in the extreme. I had only a vague understanding of the hidden technical requirements needed to write for publication. It is true I had wanted to be a writer since high school, but I never really paid attention to grammar, never suffered through a rigorous regimen of daily writing under critical guidance or had the native meticulousness required to translate the pages of vomited consciousness I produced into something readable by the general public.

I had a brief encounter with Ken Kesey, (many years after his Electric Cool Aid days) and subsequently through a bit of youthful literary stalking, learned about his process, and read some of the early drafts of "Sometimes a Great Notion". I first met him in Lawrence Kansas, at a party and helped him finish a jug of corn whiskey. It was during that blurry evening that I learned that great writers are mostly just like the rest of us. (I was 22.) 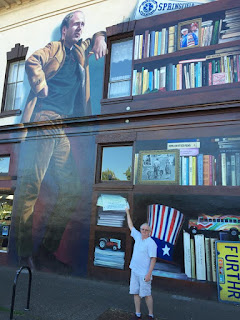 I met him again later when I moved to Eugene Oregon, showed up on his doorstep and imposed myself on his gracious hospitality. We spent an afternoon in his writing shack in back of his house, and that experience (and seeing and occasionally chatting with him around Eugene over the years, before his death in 2001), fired my belief that the dream of writing and being a writer was worth pursuing in spite of the fact that I hadn't any proof at all that I could actually write. So after that, I started hunting and pecking, (with a Royal 440 typewriter and a bottle of ever ready whiteout). I filled cardboard boxes with hideous stories.
Then came my experience in China, and I finally had a framework on which to hang a big story. I took 20 years to finish that because I suddenly had a family, so I had to work while I tried to write on the side. Finally, it all started to come together, I had 200 K words on paper, (or on disk now, because you know, computers arrived during all that) and except for the fact it was nearly unreadable, it was a novel sort of. So I tried to teach myself how to edit.

My main focus when re-writing, (and I did write many drafts of Farewell the Dragon) was to try to clarify the characters and the story itself, but I had no understanding of how to make the sentences flow or paragraphs work. One thing I learned from talking to and studying Kesey was that his early drafts of "Sometimes a Great Notion" had many of the same technical problems that my work did. It was a life-changing realization, finally understanding the power of re-writing! Of course, Kesey was a once-in-a-generation talent and he had Malcolm Cowley (who influenced everyone from the "Paris in the 20s" group to the Beats) as an editor. Talent, well there was nothing I could do about that, but editor – maybe...but first let me tell you how bad it really was.

One extremely embarrassing problem I had was my refusal to accept that dialog sentences with “he said” or “she said” attached to it was really only one sentence. For example, I would write:

I allowed this middle-school foible to be published in all of the dialogs of the first edition. This was the real reason why I had to either take FTD out of circulation or fix it with a second edition.

However, I still think it is awkward to write, “Blah,” he said, as dialog even if it is logical (and correct). So in order to have the spoken sentence stand by itself, it required some planning of the story on a technical level as well as a poetic one. (To anyone who knows anything, this is all sadly trivial, as well as clearly illustrated in any high school text on writing, but, I thought I was a free spirit who could make my own rules. (I was 54 years of age. As the Tweeter-in-chief might say – “sad”.))

Learning how to leave other clues as to who was speaking was one of the subtle things I had to teach myself so that I could write:
“Let’s get out of here!”

And know that the reader would know what I was talking about.

But even as I learned more about the craft, through trial and error and some gentle nudging from friends, I still had a manuscript full of blotches and holes, the larger part of which I could not see no matter how often I re-read it or re-wrote it. And for this, I needed an editor, but Malcolm Cowley had already died by then. That was in 2006.

When I published a second (unrelated to China) novel I finally found someone who really understood the process of producing a manuscript. It is more than just finding missing or juxtaposed words or even fixing possessive vs contractions apostrophes (it’s is a contraction, its is a possessive, I think. I still have to look it up occasionally).

All that is just technical, though. A good editor knows how to say what you are trying to say better than you do, but still makes it seem like you wrote it. When I finally did meet my editor, Linda Franklin, I almost blew it when I got a little huffy reading her first corrections. Fortunately for me, she was patient and now has helped with both of my published works.

When you read your own work after a great editor has fixed it, it is akin to walking into Paradiso with Dante, and discovering you are the same person as before, but different, that somehow you’ve shed your grimy snakeskin of a manuscript. It is like the rough stone around the sculpture that is you has suddenly fallen away, and you finally are able to see inside yourself. I can't express how excited I was to read the corrections and improvements she made to FTD.

"Did I write that?" Yes, looking back at the previous drafts, I clearly had. But it was so much better! Anyway, my friend, Linda Franklin, who also edited my other book, “Digging Up New Business: The SwiftPad Takeover” is a great editor. I would take her over Malcolm Cowley any day.

There still may be problems with the book (in fact I am positive there are), but they are all mine. I fiddled with it after she finished giving it a once over and I may have introduced more problems. But I am now proud of the novel, and feel like I can finally put it behind me and move on to my next project.
at June 15, 2017 No comments:
Email ThisBlogThis!Share to TwitterShare to FacebookShare to Pinterest
Labels: My Fiction