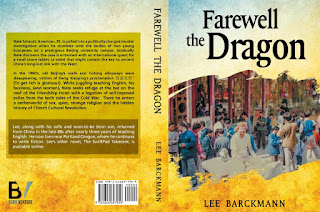 
Take a look at the reviews so far!

1. Red City Review
"Farewell the Dragon is a rigorous examination of personal agency and universal morality. It contains all of the toxic glamour of Fitzgerald’s The Great Gatsby and a moderate dash of Dan Brown’s The Da Vinci Code...Barckmann’s novel is one that has achieved something rare: It has uncovered a unique corner of twentieth-century culture and delicately sculpted it into a story worth remembering and reading for years to come."

2. US Review
"...Barckmann is reaching for a depiction of time and place and character that rivals more classic tales of flawed individuals struggling with their exotic environments and their own shortcomings...There are similarities also in flaws, introspection, regret ...which echo Graham Greene’s characters, "

3. Foreword Reviews
"A compelling read that will have readers sticking with the book long after bedtime. It’s hard to put down"

4. TL Cooper's Blog
"Both secrets and honesty were used as weapons throughout Farewell the Dragon. Farewell the Dragon brings relationships, sex, international intrigue, religion, politics, and a society in flux to create an examination of human nature that is at once blunt and nuanced."
Poet and author T.L. Cooper


This book is a cross between a double murder whodunnit and a fascinating and sexually charged romp in China that can sometimes be found in tight expatriate communities (in this case both from within the group and amongst the few Chinese who could interact with them) ...  the book is a valuable link between post-revolutionary China and the present as seen by a foreign observer. It is also written with a great deal of humor.
7.Lily Andrews for Reader Views (06/2021)
With twists and turns and surprises unraveling, this book keeps you on edge from the beginning to the end. The author depicts China’s cities and sounds extremely well. He makes all the characters stand out in a unique way which makes them fit perfectly in their role. The text explores the cultural impact of Beijing’s culture on foreigners. I loved the wonderful thoughts shared on this tome. Author Barckmann is well-versed in China’s religion, world politics, and philosophical ideologies. This makes the book not just entertaining to readers but also eye-opening....This novel is a top candidate for pure escapist entertainment. Packed with mystery, thrill, and international history, it will undoubtedly take readers on an emotive and fascinating odyssey. For this reason, I give it 5 stars. The text does not allow historical events to override the fascinating plot but instead grants readers a developing story that takes center stage.
From "Eugene Scene” magazine...
Jerry Rust writing in the "Eugene Scene" eMagazine
The protagonist, a young red-haired American, discovers the bodies of two foreigners in a dorm room at a guest house, which leads to a plot of intrigue: Was it murder or a murder-suicide?  How did they die?  Who killed them?  Now the young American became a suspect. The plot unfolds through his interrogation by police and through flashbacks, and it has something to do with an ancient and mysterious stele, a stone tablet bearing an ancient Chinese script...many characters from various countries who all found themselves in Beijing at the time —  various Europeans, an Australian, American CIA, and others, mixing with various Chinese people,  all desperately seeking and sometimes finding work, love, sex, and the deeper meaning of life. For China watchers, Farewell the Dragon is an intellectual feast, and it delivers an emotional wallop...

More Reviews for “Farewell the Dragon” by Lee Barckmann

I found this book to be a good read. One of its attractions is all the odd, intriguing characters from the Chinese expat community in Beijing prior to "Tiananmen" (they're not academic researchers, either--an assortment of Russians, East Germans, Central Europeans, PLO, Mossad, Americans, you name it, and among their Chinese friends, a People's Liberation Army "General's daughter" and a blind erhu player). Advisory: they sleep around with each other relentlessly.Another attraction is the book's very convincing overview of China in this age when it was beginning to take foreign capital, but before the economy, urban construction, and the destruction of old neighborhoods were set to go full-throttle berserk in the 1990s and after. All the plot threads come together in the end. It reads like a mystery set within a tale of personal exploration in a peculiarly welcoming, and yet rather mysterious foreign environment.

Jake
Great Murder Mystery, Great Read!
I thoroughly enjoyed this book. I loved the story with its background in the Chinese culture shown through the eyes of an American expatriate, Nathan Shute. I think that anyone who spent time on a college campus could relate to things that happen in this murder mystery. The overlapping intrigue of international spies, cultural treasures,and personal love affairs kept me totally involved. There are some books that you never want to end because you are enjoying them so much. This is one of those books!!!
Carl Warner
Farewell the Dragon definitely held my interest, keeping me awake at night. The murder mystery provides a good expat perspective on China during the period before much of the rampant economic expansion, as well as historical facts and lessons in Chinese culture. The protagonist is entangled in a mix of detective work, political intrigue, and sexual escapades. Highly recommended.
David G. Traeger
This was my "bus book" for a week in January. My constant companion for 3 hours a day amid the hustle and bustle of life on board a Max train and TriMet bus. The book held my attention and kept me quite happy while commuting. And it gave me a quote for my commonplace book: "Serene Hopelessness and tight quarters produce strict rules & nobody breaks the rules or even calls attention to them. Discontent is not allowed, especially discontent based in individualism; the appearance of unfairness must be smothered even if it not "gong ping", not a level playing field, not equal opportunity for everyone. You can not break out; it is the most important rule. You bear it. You mildly complain and listen to the mild complaints, but is repetitive and useless, just empty noise to no end."
Laura B. Raynolds
Farewell the Dragon is a wonderful postmodern work set in China in the 1980's, before the Tiananmen Square demonstrations. With a highly tuned ear for dialogue, Barckmann weaves many strands of different stories and histories into one murder mystery, rather like Thomas Pynchon's Crying of Lot 49. Like other postmodern works, Farewell the Dragon embodies ambiguity, complexity, density, and interconnectedness with references to many disciplines. Barckmann uses the coming-to-an-end of Old China along with events in the plot to enable the reader to experience a universal wistfulness and longing for that perfection in memory that is lost and will never come again. His work is a superb piece of fiction that deserves a wide readership. Bravo Barckmann!
J. Charles Kirby
Lee Barckmann has created a world that is inaccessible to most casual visitors to China. Because of his occupation as an English language teacher in the mid to late 80's ,the protagonist, Nathan Schuett is especially suited to understand the nuances of Chinese life. This story, however is about what Nathan does not know or should know but doesn't. This story is about China complicated by murder. Nathan finds himself in the middle of a detective story with misunderstood evidence and unexpected sex.I thought of the movies Chinatown and My Year of Living Dangerously.I can recommend this book
Dave from Oregon
Farewell the Dragon is a very enjoyable look at the Western expatriate community in China leading up to Tiananmen Square. I enjoyed the book as a prologue to China's post-Mao resurgence as well as an interesting set of the interplay between different groups in the expat community that are difficult for an American living in the US to imagine.
Patricia Brown writes:
This story brings chills down my spine! It is a gripping story of a double murder in Beijing and its story line is moving, intriguing and intense!
I find the investigation a very intriguing scene because you will have to guess and think carefully about the killer of the bodies that was found in an apartment by the lead, Nate! Nate is the male lead that provides interesting dynamic to the story. His ability to be clever and mischievous made the case a lot more interesting and a lot longer to solve. I believe though that this scene would have been made shorter to give more emphasis to the life that the he has lived. His life was the most interesting because he had multiple relationships with women, he sold software’s and taught English for a living and also had wonderful inputs about religion and politics. Moreover, I believe that because of the psychological and political impact of this book to the readers, I would have to say that is also educational apart from interesting.
I believe that anyone who loves thrilling books and murder case stories should read this book! It is indeed one of a kind.
Terry Crossman writes:
An engrossing read about a time 8 years before I arrived in Beijing. At times it was a bit slow and plodding and the time jumps and plethora of characters were a bit confusing at times, but the mystery and unsuspected surprises kept me going. I probably know many foreigners who lived in the pre-Tiananmen days in Beijing and I certainly do know many University teachers here and even did a post retirement stint as one myself. His portrayal of undercover missionaries and Taiwanese run joint ventures were so spot on. While I have never liked the drinking culture of expatriate life, I found the depiction of Friendship Hotel life fascinating especially as this has been my home city for over 25 years. I also love the authors appreciation of old culture and realistic portrayal of "drinking tea" with security folks. All in all a good read.

at July 09, 2019
Email ThisBlogThis!Share to TwitterShare to FacebookShare to Pinterest
Labels: My Fiction