Moving on From The SwiftPad Takeover 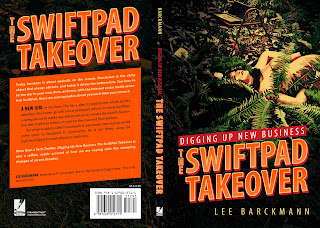 Kirkus review of "The SwiftPad Takeover"

The SwiftPad Takeover was written in a pique against my former employer after I was laid off in 2014.  I wanted to expose my impression of the infighting, greed, and incompetence at the company to release the pent up anger and hostility I felt so I could put the experience behind me and move on.

I am better now.  I was able to focus on writing "the revenge story" and at the same time satirizing Portland, as well as other types of corporate IT cultures. I had worked as a consultant at old-style firms with IT departments that had top-down vertical management structures, as well as young social media companies with horizontal structures and The SwiftPad Takeover illustrates both types. The main characters of the novel were two men, childhood friends now in their early forties, who grew up in the coast range of western Oregon. They encounter a young woman who has an idea for social media Facebook-like software, (SwiftPad) and they join up with her to make a company, based in Portland Oregon. One of the men, Jim Hunt has spent most of his career with "Global Industrial Processors", (GIP) but has quit and has returned to work for the local Portland Power Company.

GIP is after "the business" with both the power company and SwiftPad, and we follow the corporate intrigue from the inside.  And, oh yeah - one more thing, as Columbo used to say - a Serial Killer is lurking among cast of characters, leaving bodies in inconvenient places.

The SwiftPad Takeover was written as a literary experiment, an attempt to stretch myself as a writer. I decided to create some rules for myself to follow as I wrote.  I had already written a novel seven years or so previously, and I wrote that with no rules at least at first.  By that I mean, I would sit down and imagine a scene create action and dialogue and see how it fit together later. This time I wanted to plan it and have a product at the end I would recognize as what I intended at the beginning. I made a list of requirements I would follow as I wrote the book, rather than, just writing and seeing where it goes.  I think that next time, I will follow my old method and just let the story flow where it will go. I think you get a more organic product that way.   But nevermind, this is what we have got.

My first novel Farewell the Dragon
Buy Farewell the Dragon
was written in first-person and I wanted to see what I sounded like in third person. I wanted to write about the culture of Portland Oregon.  As I said, I wanted to write a revenge novel against my former employer for laying me off before I was ready to retire.  And I wanted to write an homage to my former profession.  I lucked into the work as an IT roust-about in my mid-thirties and it worked out well.    It required a lot of persistence, a certain amount of analytical ability, and a talent for spotting and spouting bullshit.  I wanted to move on and begin something else, and writing a book about the way it was allowed me to put it all into perspective and the rear view mirror.

I really wrote SwiftPad for myself, not for a particular reader.  With so much 'situation' to write about, well, maybe the characters were short-changed a little.  Jim, Chubby, GG, Macy, Trek, (aka OSWL), Alice, (Jim’s Mom), Walt, (Chubby’s Dad) and others all have somewhat predictable characteristics that weaken the book.  But it is a murder mystery novel, and I know it works on that level because several people who have read it say they were guessing right up to the end as to who was the killer. I learn some new plotting tricks and the futuristic satire of social media technology is pretty clever I think, if a bit goofy.  So it is what it is. Now that that is done, I want to move to the next project.

I am about to take off on a long trip, taking the train from Saigon to St. Petersburg, stopping a lot along the way, then on to Hamburg and then home.  I have a half-assed plan to write a sequel and have an idea that will develop the characters further - Chubby in particular, focusing on the recent election and some nastiness that will require Chubby and Jim’s girl friend Macy to confront the source of the attack on America’s Democracy.  It is still vague, but I am thinking the trip might flesh out the story.  We’ll see.

So really, I see The SwiftPad Takeover as a prequel to the real story, the coming, as yet unwritten real story.

Check out the sequel here!
at July 07, 2019
Email ThisBlogThis!Share to TwitterShare to FacebookShare to Pinterest
Labels: My Fiction