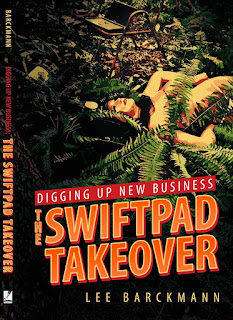 “Mark, get us a plan as soon as you can. We told them we’d start Monday. Can you get up there by then?” Persephone asked.
“No problem.” It was Wednesday. “I’m going to drive my own car up. Any problem with reimbursement?” Mark had a Bimmer; he didn’t want to be driving a piece of shit rental for three months.
“Probably not. Copy me on your first expense report. One more thing,” it was John. “They recently hired a new Operations Manager. He was working for us until last month.”
“Really?” Persephone exclaimed.
“Came out of the blue. He didn’t tell us where he was going when he gave notice. We found out about it from their CFO.”
“What’s his name?” asked Mark.
“Jim Hunt,” said Suzanne. “He was in delivery, a Systems Management guy. Our internal people didn’t have a particularly high opinion of him.” Suzanne hesitated, “And, he used to work there, at the client’s, years ago. So he probably has friends.”
“Have we talked to him?”
“Mark, that would be wrong,” said Persephone, “As well as risky…”
“We have to be careful about tampering, it’s true,” said John. “But as things develop, in the right setting. This is your thing, Mark. Everyone says you know how to handle these situations.”
“So our angel there is the CFO, what’s his name?”
“DeFonzaro, Frank DeFonzaro. He is new to the company so he has to be careful. I understand he has some plans to push. ‘Bum’ Crockett is planning to set up a hostile takeover. Try to remem­ber that we have a solid, long-term relationship with the Crockett Group. DeFonzaro thinks they would be a beneficial partner but he will need to bring his people along on that.”
“Like you say, John,” said Persephone, “we can’t…”
“I know, I know, but it is better to know what is going on across the field, right, Mark?”
“Sure.”
“Just,” John hesitated…“Just…let this guy Hunt, Jim Hunt…you got to make sure he is still our guy. Feel him out and let him know if things go well, he will land on his feet. See that he under­stands the welcome mat is still out.”
“No problem.” Mark sensed an awkward silence. He heard a cough. It was probably Persephone. “I’ll see how it goes.” He knew that the other side of the coin held true too, that a company like GIP could remove a lot of welcome mats, not just at GIP.
“OK, any questions? No? I have another meeting, if anybody wants to stay on–” Persephone said. “No, thanks everyone!”
“Bye.” “Bye” “Thanks.” BIP – BIP – BIP – BIP – BIP – BIP.
Mark got up and walked to his balcony to breathe. Holy Wow! He was reeling and now he had to call the VP. This was becoming exactly what he wanted, MORE! Alright. Mark dialed.
“Ken, it’s Mark Ruskin.”
“Mark. Great job! You ready for this?”
“Absolutely! I think this is going to be a big play for us.” Mark was excited and he didn’t mind letting it show in his voice.
“I have something to add, which I didn’t want to say in front of the rest of the team. We might have another deal in Portland. It is more long term but maybe not. It is not related to the Energy Company play. It is a start-up, a Social Media Company. They are staying completely off radar. They are putting simulations out on the Web which are getting amazing amounts of traffic. It is becom­ing a bit of a cult phenomenon. You still can’t google them. I have a guy looking into some things and will send you the update as soon as I have it.”
“Great!” Mark was confused. Is this legit? Can’t google them?
“We want you to do some recon work while you are there. Just sniff around. Once you get something, we can darken the skies with people flying into Portland. But we want to know what we are deal­ing with. It is called SwiftPad. We don’t know what it means, but it looks like they might be doing a business collaborative deal, or even going after Facebook. I’ll send you the details, but it is really only one address and one name, which I do know, and we are looking into one other…Like I said, I’ll keep you posted…We’ve dealt with him before; he is kind of slippery so be on your toes. You will know him as ‘Lonnie Wolfe.’”
“OK, I’ll check it out.”
“For business, you can trust him, don’t be afraid to utilize him. Just…”
“Just what, Ken?” asked Mark.
“Keep on your toes around him, keep it low key. And keep us out of it for now.”
Us? Mark didn’t ask him who us was.
“Understood. Thanks, Ken.”

at June 01, 2019
Email ThisBlogThis!Share to TwitterShare to FacebookShare to Pinterest
Labels: My Fiction