Digging Around the Pandemic: The SwiftPad Extinction - Chapter 6 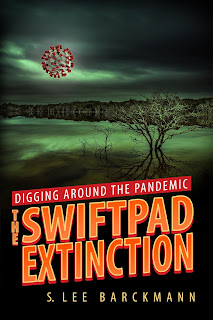 Read more, and buy the book!

THEY WERE IN THE KITCHEN OF A THREE-STORY BRICK

home in Victoria Village, downtown Memphis, and Chubby was hanging around the chips and guacamole bowl. It was muggy, but the windows were open, the sun had been down for a couple of hours, and it was comfortable. He was talking with a pretty Black woman with freckles under her eyes, eyes which fired out a complex mix of messages that made Chubby realize they were about to hatch a conspiracy together. Her short, tight hair, her narrow yellow jeans, and her deep V-neck coral-colored floral blouse all accentuated her necklace of brown amber stones that were strung to be progressively larger as they plunged down her neckline. She was drinking white wine.

“You are a friend of Aldane, huh?”

“Yeah, uh…” As usual, Chubby stuttered and swallowed his words when talking to a beautiful woman.

“I know who you are – Kip, right? I am Tiara. You must have met the Colonel in Portland, right?”

“Um – yeah. I did.” She was beautiful and getting more so by the second. “I guess you could say I worked – we worked together. The Colonel came to my apartment and he and Harvey Grennell worked out the strategy – for the battle.”

“Well – yeah…” Kip didn’t feel like talking about how he led several thousand people out to block the Banfield the night of the Portland Insurgency. “But actually, they just told me what to do.”

“Oh my, well, I am going to want to hear all about that! But what do you think about Dash biting the big one?”

“I wouldn’t want to have to carry the casket,” said Kip.

Dashell Addison Sketerson was the second highest paid and rated AM jock in the country, the godfather of the rightwing tilt in talk radio. When the FCC eliminated “The Fairness Doctrine” in the late ’80s, the hounds from fascist hell were released onto American radio airwaves, and Sketerson was the lead dog. Suddenly the Book of Revelation joined forces with the jabbering of demented, race-baiting Klansmen, with screeding spreaders of lies, vituperative fulminators of hate, and paranoid preachers of malicious propaganda. Led by Dash Sketerson, they delivered “the facts” of crazed liberal conspiracies being hatched by swarthy city-dwelling fiends right into your car radio. Dash was not quite the vilest of the lot, but to some he was the most entertaining. As he got famous, he became “a thing,” just by showing up at rallies and TV talk shows, and conventions. He started rubbing elbows with the new wave of unscrupulous pols, such as Real-Prez, and other similar scum, who themselves were trying to ride the rightwing radio wave the jocks had conjured up. To most of the folks outside RedHat country, he was no longer funny or taken seriously as a political maven. He had led his Dashoholics down too many easily disproved rat holes that even he now had disclaimed. His “fan base,” the Dashoholics, totally bit into his daily shit sandwich rants, and were able to quickly forget what he told them if he changed his slant 180 degrees the next day. Analysis of his career showed that once he became famous he became a complete toady, and sycophant, who waited for the signals from the pols he helped elect. He basically created Real-Prez, but now he had to kiss his ass.

Dash, like Real-Prez and so many others of that ilk, was a weakling who always sought Daddy’s approval. His family had local prominence around southern Missouri. But Dash was a loser by most of his family measures. He dropped out of college and was a slob and a failure who lived on welfare through his 20s and early 30s while moving from radio station to radio station. Then the Fairness Doctrine went away and he discovered that hate sells. Now he had an $80 million-a-year gig, plus innumerable side benefits. Dash wasn’t stupid; he knew he was an entertainer, a circus monkey. His voice was everywhere. You could hear him yelling on loudspeakers into factory floors, dentist’s offices, farmhouses, bars and lounges, dinners, and religious gatherings across middle and southern America. His voice was inescapable.

Much of the current situation, the Red-Blue shit, could be laid at his feet.

“He was pretty obese, and was in and out of the hospital for diabetes, and heart blockages. So, it was coming. Way over 300 pounds. One unattributed story is that he died on top of his skinny, young third wife. Can you imagine having to crawl out from under that hulking blob while he is leaking bodily fluids out of every orifice? I guess some think that is the manly way to go out. One of his admirers called it ‘a curtain call at Rockefeller Center.’”

“Oh – right, Ford’s VP went out that way too. So Dash pulled a Full Nelson,” said Kip, waiting in vain for a laugh. “They will make a big deal of his funeral,” Kip continued. “The so-called Real-Prez will probably speak.”

“So-called! Who can speak his name without gagging? Fuck, it isn’t anything to cheer about though. We have to be on guard. Some of their people will probably be looking for revenge.”

“No, but that doesn’t matter. The fat fuck killed himself with junk food just to prove he wasn’t liberal. He really is the prototype of Real-Prez.”

“Not a decent bone in his carcass.”

“Yeah,” said Tiara. “But he was funny in a hateful way sometimes I suppose. If you see him as a dumb fool when he does his bits, they make a kind of satiric sense. But always, he has to hurt somebody, always in a cruel way.”

“To junk food!” Kip held up his glass. “The great equalizer!”

“And third wives!” Tiara held her glass up too and they drank.

“So, aside from that, what do you think?”

Kip thought – he stopped himself. Can’t do it, he thought. Can’t stop looking at her either. “You mean what do I think about Hassan Coleman?”

“He is the full deal, no doubt,” said Kip. “I think if we can get past all this stuff now, he could be President.”

“Oh, I don’t know. I wouldn’t go that far! Not yet anyway. He doesn’t take himself very seriously. And with his reputation, as it is now, no. That is kind of a drawback in politics. In a small city like Memphis, you can practically meet everybody, or at least be seen. Anyway – who knows if we are going to get past this stuff, as you say.” She took a long sip of wine, keeping her eyes on him the whole way. “I want to thank you for the money by the way. It came in handy. We needed to up our game. Know what we bought?”

She laughed. “No, we didn’t really need that. Supplies are stocked! No, we used it to get some secure communications gear. Upgraded our whole system. Now we can put people in the field and keep in touch while keeping an eye on these bastards.”

“Memphis helped save my city, so glad to help.”

“Um huh! Well, five million is a nice thank-you! What do you think about the international situation?”

“It was short of five – more like four point eight. What do you mean, international situation?”

“Think the Russians are helping Real-Prez like they did the first time?”

“You mean are they exploiting SwiftPad, like they kind of did during the last election? I don’t think so. I mean it is possible, but we, I mean SwiftPad, have thousands of people, all over the world, stomping out propaganda fires every day – all the time – I don’t think it is a big problem.”

“What about See-2-Bee? You know they picked up Gupta?”

“We got some antennas down here. You West Coast kiddies think you are on top of everything. We got some tricks down here too.”

“People are disappearing all over the country, and they ain’t showing up in jail neither. We are setting up to strike back.”

Tiara pulled her head back at his blunt question.

“Huh? You really don’t know much, do you?” With a smile she couldn’t contain, Tiara picked up the bottle of sauvignon blanc and filled her glass. She held it up. “That bourbon you’re drinking is OK for sitting in on card games that you expect to lose.” She held the bottle up, weaving to the funk coming out of the front of the house. “Are you expecting to lose, or are you going to keep your head in this game?”

Kip poured his drink in the sink and held out his empty glass.

“A dirty bourbon glass? This is good wine!”

Kip held his bourbon glass even closer, and she shrugged and filled it.

Tiara put the bottle down and grabbed his hand and they did some shimmying to the music. She got real close to his face.

“Nikoloz told me to say hi. And Milana sends her regards.”

Kip didn’t flinch or break his rhythm even a little. But his eyes did.

“You know he works for…”

“Oh, I know who he works for!” She closed her eyes and moved closer with her hips. “What’s the matter? Georgia on your mind?”

Yeah, Kip thought, Georgia was on his mind. He had left Tbilisi only a few months ago, yet it seemed like a lifetime. Milana! She had saved him at his low point, and made him happy, maybe happier than he had been with GG.

“That was rude of me. But I just wanted you to know – we really don’t know – but – uh – Nikoloz seems to know something about it – and well – we think she is in Russia. Or maybe just on her way.”

“Yeah.” Tiara looked at him quizzically for a couple of seconds.

“Don’t you call her GG?” Tiara gave him a look, with a hint of a smile that was both mocking and sympathetic.

“Not anymore. Too intimate. Is she OK?”

Tiara’s countenance shifted and became more serious. She looked away, shrugged, and shook her head. “I don’t know. Are you OK?”

Kip stared at her. “Nikoloz, huh?”

Kip had told no one about his encounter with Milana’s mysterious half-brother, whose theatrical deletion of the SwiftPad off of his fone had so shaken Kip six months ago. Kip had assumed he was GRU (KGB), and now he was in contact with the Memphis resistance?

at September 28, 2020
Email ThisBlogThis!Share to TwitterShare to FacebookShare to Pinterest
Labels: My Fiction