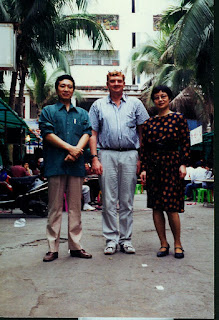 At a certain point in life, you realize that losing friends is normal and to be expected. I lost my parents and then heard that Qi had died of pancreatic cancer all almost within the same year.

Qi had a bigger effect on my life than anyone outside of my family. In my early thirties, during the early eighties, when I was somewhat lost, I met Qi and he taught me how to learn Chinese, then invited me to teach English at the school he represented. I quickly learned that every single one of my Chinese students knew English grammar better than I did, (or do.) So I had to teach other things, most of which would get me kicked out of any respectable language teaching program, but, if it I do say myself, my method worked. Almost the entire class I taught passed the TOEFL and were able to study abroad.

Qi and I were both born in second half of 1951. I met him in 1983. I had gotten divorced and after that had quit a pretty good job, out of pride, ennui and spite, and then, to make it worse began to feel that I had made a horrible mistake. I was floating, in my early thirties, with no ambition and no ambition to even have ambition. I took a Chinese class on a whim, at the University of Oregon, and he was the teacher.

And Qi was a wonderful teacher, maybe the best I had ever had up at that point. I really never expected to learn Chinese when I took it, I just thought the experience would broaden my understanding of Asia and give me an excuse to hang out with college girls. But Qi was so charismatic and so determined that everyone in his class would learn his language, that I had no choice but to take it seriously and study.

He only stayed in Eugene for a year. He loved it, loved America, loved Oregon, everywhere he went he made friends and changed the people he met for the better. Or rather, gave them some special thing that caused them to change themselves. He told me, “I don’t want to live in Chinatown.” So I brought him into my world, which at the time was the crazy 1980s Eugene Oregon bar and party scene. Even on the nights when I didn’t feel like going out, he would get me out and with him around it was always exciting, and interesting. We would end up in amazing conversations with people who I otherwise wouldn't have realized existed.

He had his own life too, which I won’t talk about. But when it was time to return, to his wife and son, even though he was offered a very well paying job to continue teaching, he went back. I know it wasn’t easy, but I also know he never regretted it. In 1984, China was still blindly finding its way back to sanity, and no one was sure it wouldn’t revert to the madness of the Cultural Revolution.

He had been exiled like everyone else in China in the 70s to the countryside. He told me at that time, he was always looking for a way out, even though at the time it seemed worse than hopeless. He studied English quietly when no one else was watching. His father had been one of Mao’s most feared guerrillas, leading a small band on many attacks against the Japanese. But in 1965 his father was denounced, beaten and exiled. Qi had to raise himself and support his family, until his own exile a few years later. They were both released in 1977, and Qi resumed his studies and eventually got a chance to teach and study in the US. If he had stayed in Oregon he could have gotten his family to join him eventually, and he knew that, but he decided to keep his promises and return.

I took another year of Chinese, studied hard, and he invited me to teach English in Xian, where he was the vice-director of the English Language training program at the Xian College of Medicine, (now Xian Medical University).

He saw to it that I didn’t end up always trapped in the sometimes claustrophobic world of Foreigners in China. He got me on the faculty basketball team, (a big deal, we traveled to other schools for tournaments and we all got a bump in salary – so I can say I played pro-basketball.) He introduced me to people, including his legendary father, hosted my parents when they visited, and supported me against the frightened and sometimes dangerous Communist party on campus. The most notable accomplishment we pulled off was performing two plays in English for the entire campus. I promised my advanced class that we would get the plays they were memorizing performed. And we did. All lines were in English and hundreds of students and teachers came to see the performances. 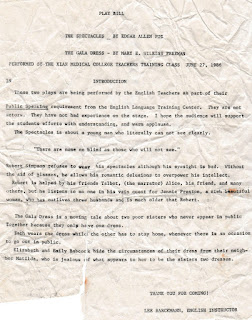 Qi and I used to talk about being old men together after life became normal in China. There are not many people in life that have a transformative effect on you. I can’t imagine what my life would have been if I had never met Qi, but I am sure it would not have been as full. He was my big brother, born three months before me. He was so wise and good, and he made me so much better than I would have been otherwise. I wish he was still around, but, really, in my mind, he never left.

at June 15, 2021
Email ThisBlogThis!Share to TwitterShare to FacebookShare to Pinterest

What an amazing story. We've been friends for 35 years and I never knew much about how you came to teach in China. You have had quite an interesting life my friend.