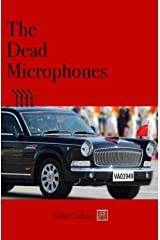 “Dead Microphones” is an omnivorous look at China today. Mark Oulton has produced a very interesting sequel to his first book about China, “Lure of the Red Dragon”.  I think that the two books together comprise an honest, unfiltered 360 degree  look at life in China.

Since publishing his first book, Mark has become an even more fluid, confident writer. Mark is a very open, unabashed, self-reflective man who has had a successful career in business, and has retired to a town outside of Suzhou with his wife Yan Yan.  He writes about everything, history, law, business, technology, society, food, etc.  It is difficult to find a weakness in his knowledge or presentation, even though when one sets themselves up as an expert on everything, they make a tempting target.

We get a tour of the many Chinese festivals and holidays, and how people celebrate them. He gives a deep political analysis of the 70 year anniversary of the founding of Communist China, which culminated in the massive military  parade in Beijing.  He writes about travelling by train, and the different classes of tickets and services, and what to expect from your fellow riders.

He has a huge section of the Chinese Diaspora in Singapore, Thailand, Philippines and the US, and how these cultures have affected China.

Mark has a long section on food, and the many regional varieties. He has great descriptions about the foods (and his own experiences eating) for the regional styles: Shandong (鲁菜)， Jiangsu (苏菜), Cantonese (粤菜), Sichuan (川菜), Hunanese (湘， Fujian (闽菜)， Anhui (徽菜)， Zhejiang (浙菜), etc. Here is a description of one of my favorites, (I lived in Xian for a year and this was one of my goto street foods)

“Cold Noodle Dish (凉皮 – liang2pi2). Region:  Xinjiang and Shaanxi.  The noodles are generally made from wheat flour. The dough is soaked for up to a day, and the milky water, which is mostly starch, is then discarded to leave a cold skin (the meaning of liangpi) of mostly gluten. Then it is boiled and then chopped into long rectangular noodles as the basis of the cold dish.  Vegetarian ingredients are now added depending on the different recipes and include chilli oil, vinegar, sesame paste, cucumber, bamboo shoots, peanuts, garlic, coriander, tofu, etc.  It's a perfect dish for a hot summer day and has a similar cooling effect to Spanish gazpacho cold soup.”

Here I think Mark displays a slight “foreign snobbishness” for their adopted region. (In his case Suzhou, which has some of the most sophisticated and delicate dishes in China). Other regions in China consider Shaanxi a culinary wasteland, but it worked for me, for some reason. (Above description - he adds too much shit on the noodles. The noodles just plain, with just a splash of some vinegar, are so satisfying.)

Chapter 10 brings you up to date on the latest archeological finds, some real gems:

“Current thinking is that trade was extensive within most of modern-day southern China and Thailand and with some credibility with ancient Mesopotamia.  Shu-style tree and sun worship were also an essential part of those other civilizations, and historians have struggled to explain how China's Bronze Age developed compared to the west. The oldest known bronze artefact in China is a primitive knife found in Gansu Province dating from around 2800 BC, but the level of sophistication in the mysterious Kingdom of Shu is exponentially higher, and perhaps this is the missing link?”

Another interesting passage, pulled out almost at random by me here: “During the Long March (1934 to 1935), the main body of 86,000 communist soldiers (7,000 survivors) were 70% Hakka. Although the Hakka have been fleeing throughout history, they have a fearsome reputation as fighters.  The Nationalist pursuer of the Long March soldiers in the Fifth Encirclement Campaign, General Xue Yue, was also a Hakka.  A further example is the Communist Hakka, Marshal Chen Yi, also from Sichuan, who in the War of Resistance against the Japanese (1937 to 1945) commanded the New Fourth Army and led the forces that defeated the nationalists in the Huaihai Campaign.  In 1955, he was made a Marshall (pg 2661).”

ark writes about how the Warring States official and the greatest hydraulic engineer of the ancient world Li Bing diverts a tributary of the Yangtze in Chengdu.

“The three part system Li Bing devised is still in use today. In winter the (tributary)  Min river is pregnant with fast flowing water that caused flooding but (at the same time) there was a shortage of water for nearby farmland in the summer. First Li Bing built a levee called the Fish Mouth, that split the Min river in two parts. In dry times the inner main channel continued its course, but in times of flooding 40% of the water was diverted by the levee to follow a course away from the Chengdu plain and eventually join up with the Yangtze River..  …There are steep drops to the pounding river and waterfalls in the ravines below.   Several small groups were cycling. The thought did occur to me that apart from the apparent diversity of vegetation and wildlife, this would make a world-class motor rally stage if properly supervised and then retracted such a thought in deference to the verdant and tranquil countryside.”

As you can see from the passage  above, Mark is an old school guy, who I could imagine in a David Niven movie, racing down the mountainside to save a high born damsel...

Another fun fact - “Howard Johnson is a premier brand in China and has nothing in common with the sometimes-grungy hotel in the United States.” As an immigrant and now citizen of the US, Mark apparently does not remember when Howard Johnson was a premier brand...but I digress (which is what Mark does continually and mostly delightfully).

He has long discussions about architecture and climate. Which takes him to Harbin and the Ice Festival there and he  goes off talking about Unit 731 the grisly Japanese BioWarfare outpost based in Harbin during WW2 and the extensive descriptions of the experiments done on human beings there.

He discusses the Chinese military, (although even only being a year old, some of his conceptions seem already outdated).

Of course he talks about how the virus affected him and his neighbors in their apartment block near  Suzhou China.  The details of living with the extensive government controls put on the population to control its spread are really interesting when compared with our own primitive response to the virus.

He test drives a robot electric car.  He is reporting on technology: “As we progressed down the road, a line of cars, drivers frustrated by the jams, were coming down the wrong side of the dividing “do-not-cross yellow line”, a pretty regular sight in China.  The Model W did not make the more normal manoeuvre which is to push the same direction traffic towards the edge of the road to try and create an extra lane.  More furious honking from both directions. The next set of traffic lights was interesting.  The traffic signs indicate no right turn and no left turn, i.e., straight only, but this was blocked by a barrier The Model W voice is temporarily silent, no doubt fizzing with terabytes of calculations, and then announces, "driver, please take control of the vehicle" in perfect Eton House English.”

He explains technology - and is interesting doing it, and there is no doubt it relates to China, but I think it would be more interesting if he had “skipped ahead” of the general explanations and dove into the China specific ramifications. I think sometimes he explains too much. But then, in most cases I see where he is going and of course learn something.

“There are five pieces of technology currently being developed in China that will have long-term ramifications for its citizens: Facial Recognition (FR), 5G networking, social credits, blockchain, and monitoring/welfare.

“Today in China, you will see police officers wearing a special type of sunglasses with an attached camera/processor, and these do work.  They are used for FR and something familiar to mobile phone users who use FR instead of a password.  Next to the person under scrutiny are text bubbles showing items such as name, age, home, and of course, if wanted by the police.”

China and 5-g - the history of electronic communications starting with the breakup of Ma Bell…he has a long discussion about blockchain and China’s foray into crypto-currency.

He also comments on the coming importance of “Social credit” - This is the score that  is currently being developed to measure citizen’s “social credit” which is more than just if they pay their bills on time, although that is part of it. There are cameras everywhere and if you do your recycling wrong you can get a demerit on your social credit.  Any infraction, a traffic ticket, a bad report on your weChat posts, anything can lower your “social credit”. Naturally if you do “good” it adds to your credit. This is like your permanent record, and can potentially affect all of your future prospects - employment, marriage (people post their social credit scores on singles apps) and whether you get a visa to leave the country.

He gets off track when discussing the US domestic political events of 2020. He has long criticisms of Trump, and his approach to the virus, and his foreign policy statements, and frankly the whole mess. It is clear he gets most of his information from CNN, and from reading news reports that he must get via VPN connections.  There is nothing wrong with anything he says, but it doesn’t belong in this book. It doesn’t ruin the book. And I can see where someone might disagree, and say the US response to the virus and the election itself plays an important role in understanding how China sees itself and reacts to it. But to me, a reader who has lived through this, up close from the US vantage point, I learn nothing from his comments. Saying Trump is deranged doesn’t inform me, no matter how much I agree with the sentiment. When I read a book like this, I want to escape from the trap we Americans have built for ourselves.

But other than that, I continued to learn a tremendous amount from Mark. He is a brilliant autodidact. He doesn’t take himself too seriously, but his knowledge is encyclopedic. He is a fine, entertaining writer, and if you are interested in what is happening “On the Ground” in China today, it is a great read.

at December 06, 2021
Email ThisBlogThis!Share to TwitterShare to FacebookShare to Pinterest
Labels: China, Review