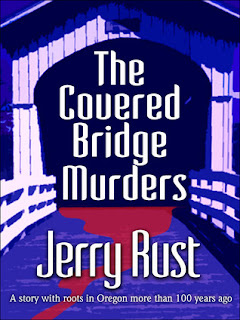 Limited edition is available direct from the Author

From a  Review on GoodReads

“The Covered Bridge Murders” by Jerry Rust is a very entertaining and adventurous detective novel with its roots plumbed deeply into 19th and early 20th century Oregon lore. It introduced me to one of the most fascinating (and real) writers/characters in the history of the West, Opal Whiteley. Before you begin reading Jerry’s novel, I urge you to look her up on Wikipedia. She was a savant and a prodigy, a famous American nature writer, and a beautiful yet mysterious woman, whose unpublished book “The Fairyland Around Us” is legendary as one of the “lost” books. Her sensational diaries were published by Atlantic Magazine in the 1920s. She was raised in logging and mining camps around Cottage Grove Oregon, and ended her days in an “aristocratic” asylum in London, claiming to be the lost daughter of the Duke of Oreleans. Her attendants in the asylum called her Françoise Marie de Bourbon-Orléans. Her life story is amazing, (and her claims of a royal birth are not completely beyond the range of possibility). Anyway, Opal plays a major role in this story.

The main story in the novel is set within the last 20 years, and is about two University of Oregon college boys, looking to make some extra money by spending the summer panning for gold up in the Bohemian mountains east of Cottage Grove. They meet an oldtimer, Ray, who has lived up in those mountains for all of his 90 some years. Ray is a very interesting character as we gradually learn, and befriends the boys and tells them the story of 10 lbs of lost gold nuggets that were robbed while being transported from the Bohemian mines to a bank in Eugene. He convinces the boys to help him look for the gold, and they follow the clues around Lane County, some of which are in the Opal Whiteley museum in Cottage Grove.In addition to being a good storyteller, Jerry is a wonderful nature writer, and describes Oregon's feral beauty with poetic grandeur. His knowledge of western Oregon’s “flora and fauna” is very deep and he paints a picture of the wild colorful natural wonder of the area, both now and in the past, that alone makes the book worth reading.From a very unassuming story-telling manner, with the old timey style of a Hardy Boys adventure, the pacing of the novel grows faster and more profound with each succeeding chapter. . It gets better, and better and in it leads the reader to the “answer” of one of the most profound mysteries in American literature.As I said, if you don’t know who Opal Whiteley was, (as I did not) then read a little bit about Opal Whitley online (there are many articles about her) and then read “The Covered Bridge Murders”. With its Local color, and adventure, this literary “murder” mystery is will be a fun and absorbing read.
at December 01, 2021
Email ThisBlogThis!Share to TwitterShare to FacebookShare to Pinterest